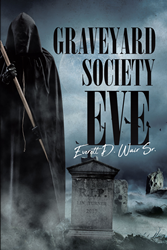 Everett D. Wair Sr., author of Playing A Dangerous Game, has completed his new book, Graveyard Society Eve, an adult comedy story about Oak Wood Cemetery, a graveyard on the South Side of Chicago created by Spirits come to life that live as if they were still alive while waiting to go to Heaven or Hell. The story begins with the death of Eve, a churchgoer from Chicago, who is shot on a cold winter night.

Writer Everett D. Wair Sr. writes: “There is no place like Chicago. It’s a city with a lot of history. There’s Alphonse Gabriel Capone, sometimes known as Scarface, who was an American gangster and co-founder of the Chicago outfit during the Prohibition era. First African American Mayor Harold Washington served Chicago from 1983 to 1987, beating incumbent Mayor Jane Byrne. It is the city where the forty-fourth president, the first African American, Barack Obama won the 2008 election. Chicago’s African American newspaper The Chicago Defender was founded in 1905 by Robert S. Abbott in the south of the city. But one of the most popular areas of the city was and is Bronzeville. “

The compelling story of Everett D. Wair Sr., published by Page Publishing, follows Eve as she finds herself amid the souls of Oak Wood Cemetery. Her best friend, also a ghost, tells her that her daughter is living a sinful life. Eve now has a mission to save her daughter, but she must solve a long-hidden secret while she is here.

Readers who want to experience this fascinating work can buy “Graveyard Society Eve” anywhere in bookstores or online from the Apple iTunes Store, Amazon, Google Play or Barnes and Noble.

For more information or media inquiries, contact Page Publishing at 866-315-2708.

About the page publication:

Page Publishing is a traditional full-service publisher that takes care of all the intricacies of publishing its authors’ books, including distribution in the world’s largest retail stores and royalty generation. Page Publishing knows that writers need to be free to create, not to be bogged down in the logistics of e-book conversion, setting up wholesale accounts, insurance, shipping, taxes, and so on. Page’s accomplished writers and publishing experts enable writers to leave these complex and time-consuming topics behind and focus on their passion: writing and creating. Learn more at http://www.pagepublishing.com.