At Chambers Bay, I discovered a golf moment I didn’t know existed

At sunset, Chambers Bay is worth the effort to find it.

VANCOUVER – There is, the saying goes, only one New York. Only one Taj Mahal. Only one Mount Everest. Only one Great Wall. There is not, however, only one Vancouver, and man I wish someone had told me that prior to 4:30 am, when an alarm swung a sledgehammer through my Thursday morning.

It was before dawn in Whistler, BC, and my tee time at Chambers Bay wasn’t for nearly 10 hours, but my itinerary didn’t care. The first of three legs of travel — car, then train, then car again — lay before me, and even an extra minute of shuteye could be enough to derail the whole operation.

The plan was ridiculous. I’d drive two hours to Vancouver, return my rental car, take a cab to the train station, hop on a train to Seattle, get in another car and drive to University Place — near Tacoma — for that afternoon’s 2:10 pm tee time. If everything broke right, I’d find my way to Chambers Bay with maybe enough time to hit warmups on the range.

“Why don’t you just … drive your rental car all the way into Seattle and return it there?” A concerned friend (or 12) wondered, noting the drive from Whistler down to Seattle would take half the time. But a threatening call with my rental car representative warned of significant upcharges — at best — should I cross the border in my hired Kia Sportage.

I reached Vancouver just before sunrise and returned my car. It was time to head to Vancouver Train Station, where my Amtrak down the coast awaited. An odd name for a train station, I thought to myself as I unloaded the car and pulled up the address.

I’d made it halfway to the taxi stand when it hit me.

I was in the wrong Vancouver.

You see, dear reader, when I’d made travel plans to visit a new corner of the world I’d never seen before, I foolishly assumed that no area would be as wholly unoriginal as to call two cities in direct proximity to one another by the same name. But I had, in fact, undersold the fine city of Vancouver, Wash., an area I have since learned is the fourth-largest municipality in Washington state and a fine place to board a northbound train for Seattle.

(An aside: I have no contempt for the city of Vancouver, Wash., which I’ve been told is a fine place with fine people, if uninspired founders.)

I was lost, both metaphorically and literally, as I stood on the cement outside the rental car area and tried to figure out a cost-effective path to making my tee time. Flights were too costly, trains weren’t running until the evening and I soon learned that a ferry didn’t exist. I might well have paid the upcharge on my rental car … had I not returned it 35 seconds earlier.

But there was one potential salvation: the bus. It departed an hour after my scheduled time. I’d be cutting it close to missing my tee time — very close — but at least there was a chance.

Six hours later, I arrived in Seattle ahead of time the beneficiary of a minor miracle: an uncharacteristically light day at the US border. There was still an hour’s drive ahead of us, but it looked like we’d earned ourselves 15 minutes of daylight.

We screeched into the parking lot at Chambers Bay on what felt like two wheels. My colleague Dylan, GOLF’s resident Seattleite and Chambers superfan, ran inside to check us in. I threw on the only set of clean clothes I had — a brand-new fit I’d gotten specifically for the round — tied my shoes, and slung my clubs over my shoulder.

All of our market picks are independently selected and curated by the editorial team. If you buy a linked product, GOLF.COM may earn a fee. Pricing may vary.

The perfect gear for sprinting to a last-second tee time, sweating a travel change, playing one of the rounds of your year, and everything in between.

“You guys here for the 2:10 tee time?” The shuttle driver asked as he scooped us from the clubhouse — which sits at the property’s highest point — and brought us down to the first tee.

As we walked to the tee box, I finally allowed myself to breathe. Slowly, I took in the property for the first time.

To my left was a public park, a parking lot, and a set of giant concrete ruins, holdovers from the rock quarry that used to be the course. To my right was a devastating dunescape, with grass and trees tumbling over the hills. Behind me, the greenery seemed to chase the hill all the way back up to the clubhouse. And in front of me?

“Oh man,” I laughed giddily as I finally saw it. The golf course. Most of it, anyway. Set pristinely and unobtrusively onto a mile’s worth of Puget Sound waterfront.

We started our round on the back nine just as the sun had begun its slow descent into the horizon. There would be another several hours of daylight, and we’d need every minute of it. 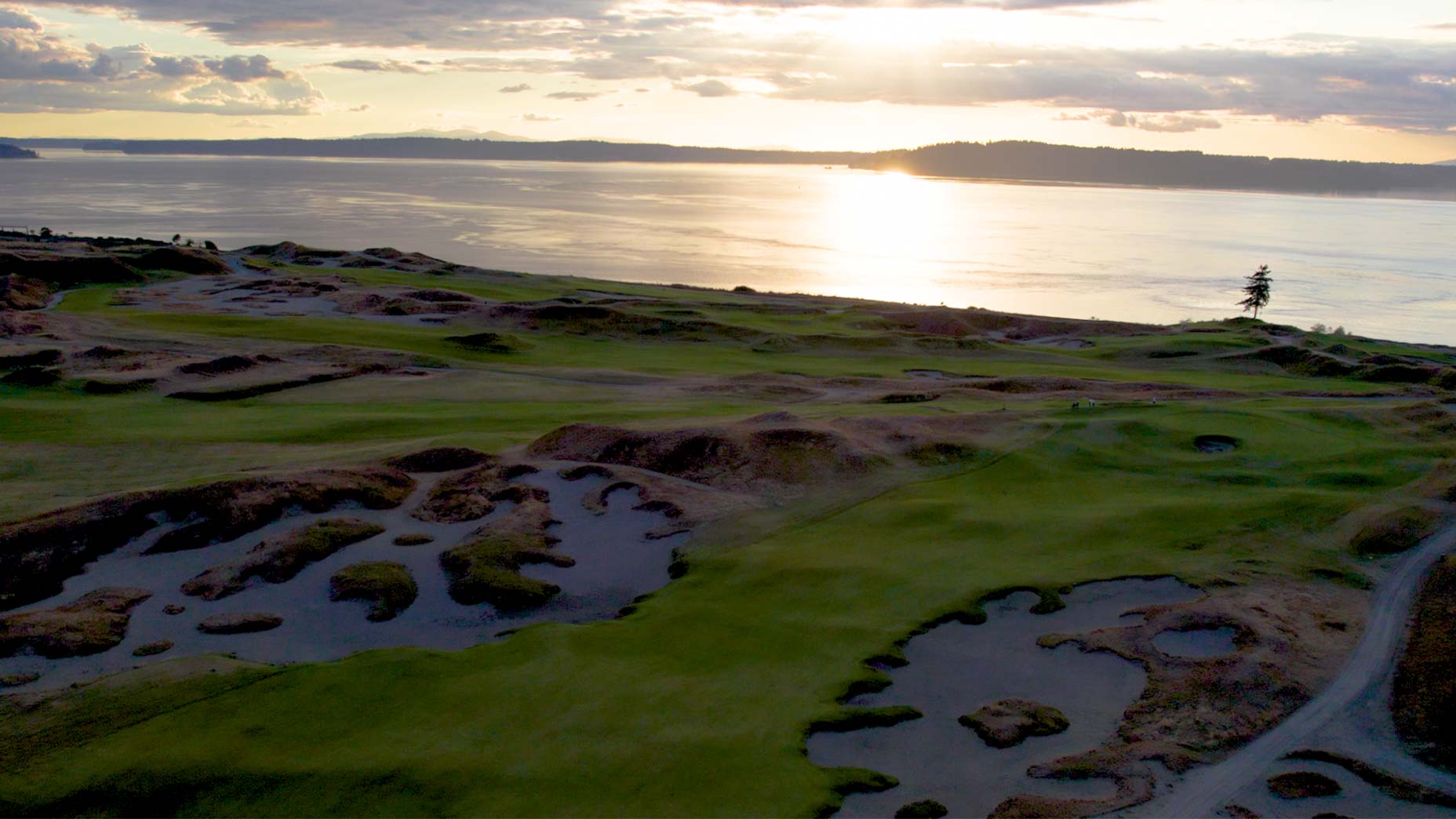 Chambers Bay at sunset, a visual that must be seen to be believed.

It was still warm as we turned for home shortly before 7 pm The last wisps of sunlight seared the horizon, electrifying the water and the land in a glow of red and orange.

Darkness was looming. With each shot, the ball grew harder to follow, and the sky turned a more dramatic shade, but our pace remained unhurried. When you’re on Chambers Bay, there’s no rush to get off. Some meals are so good, you don’t ask for the check.

We’d started on the back nine — but I particularly enjoyed our finishing holes: No. 7 is a brutal par-4 that doglegs over a mammoth waste bunker and up to the course’s height of land. No. 8 is a par-5 that marks the course’s eastern border and offers a sprawling view of the entire property. On a normal day at Chambers, the water might have commanded our attention down the closing stretch, but by finishing on the front, we watched those glorious last few moments of daylight with the expanse of the property in our foreground.

Eventually, we reached the tee box on the 9th, our 18th, a particularly dramatic par-3 that drops more than 100 feet from tee to green, with the dusky Puget Sound serving as our backdrop. Darkness was blanketing the course now, and following our tee shots had quickly morphed into a game of hit-and-pray.

Just as it came my turn to swing, the day’s final train rumbled into view. I held over the ball for an extra beat as the first cars chugged across the horizon. It’d been a long day, but for the moment, I found myself wishing it’d run just a few minutes longer.

All I’ll say is this: they’ve missed something important about the Chambers experience, something you should know before you board a flight to Seattle or a train from Vancouver.

You’ll find a piece of yourself at Chambers Bay, no matter how lost you are getting there.

James Colgan is an assistant editor at GOLF, contributing stories for the website and magazine. He writes the Hot Mic, GOLF’s weekly media column, and utilizes his broadcast experience across the brand’s social media and video platforms. A 2019 graduate of Syracuse University, James — and evidently, his golf game — is still defrosting from four years in the snow. Prior to joining GOLF, James was a caddy scholarship recipient (and astute looper) on Long Island, where he is from. He can be reached at [email protected]

Warning Signs Your Teen is an Dangerous behind the Wheel