Amazon workers and others cross Lenora Street during lunch hour near The Spheres on the company’s Seattle headquarters campus on Wednesday. (GeekWire Photo / Kurt Schlosser)

The Banana Stand, Spheres, restaurants, food trucks and mini dog park were all bustling on and around Amazon’s headquarters campus in Seattle on Wednesday afternoon. As employees ventured out during the sunny lunchtime hour, the only cloud hanging over the company’s office towers was the layoffs being conducted inside.

A small handful of employees and passers-by, speaking anonymously to GeekWire, expressed mixed emotions about the news this week that thousands of workers could potentially be cut by the tech giant.

“It was scary,” said one Amazonian outside the Doppler office building who was happy to still have a job. “I work on devices.”

The layoffs of corporate and tech workers were expected to impact those working on the company’s Echo devices and Alexa voice assistant, as well as retail operations and human resources. Devices and Services chief Dave Limp addressed the cuts in a memo to his organization on Wednesday, writing that consolidation of teams and programs would mean that “some roles will no longer be required.” 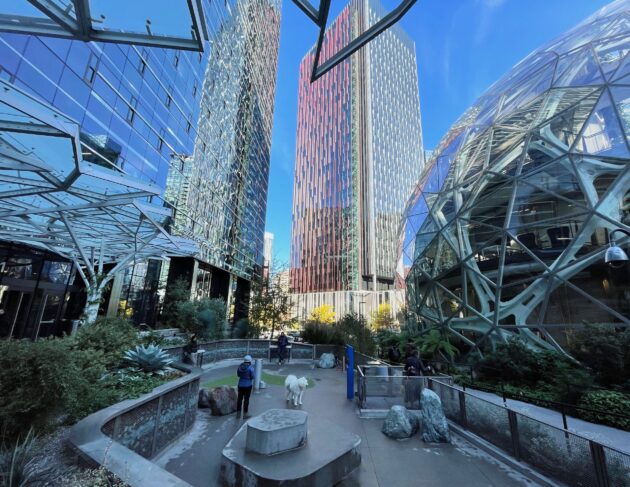 But another employee who said he’d been with the company for three years and works in human resources wasn’t overly concerned about his fate.

“I feel great,” he said, adding that he would consider taking a voluntary layoff, which could result in as much as five months of paid time. Asked what he would do, the man said, “What wouldn’t I do? Tulum… Southeast Asia…”

Another employee said he was on a “pretty core team” and wasn’t worried about being let go.

Limp said in his note to employees that those impacted will get assistance in finding new roles within the company. If that doesn’t work out, they’ll be given a package that includes a separation payment, transitional benefits, and external job placement support.

“We don’t take these decisions lightly, and we are working to support any employees who may be affected,” said Kelly Nantel, Amazon’s director of global media relations, as part of a statement to GeekWire.

The cuts come as Amazon and a number of other technology companies look for ways to cut costs amid a slowing economy. Amazon CFO Brian Olsavsky told analysts on Amazon’s recent earnings call that the company was preparing for “what could be a slower growth period” due to increased foreign currency headwinds, global inflation, fuel prices, and rising energy costs.

Amazon previously told employees that it would freeze corporate hiring, and the layoffs match moves made by Meta, Twitter, Lyft, Redfin, Convoy, Stripe, Flyhomes and many more companies. 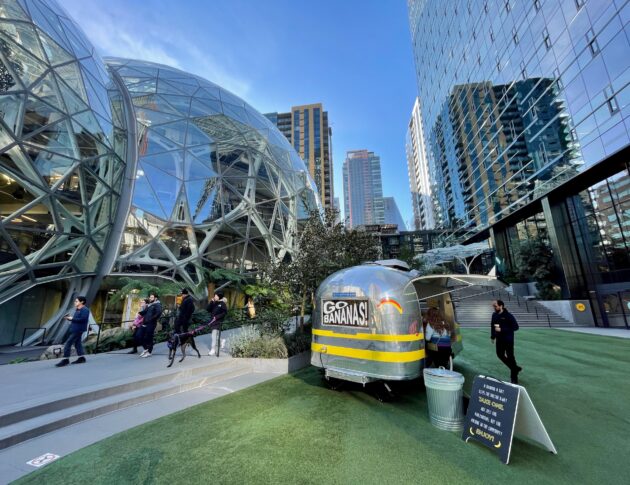 Inside Capelli’s Barbershop at the base of Doppler, the barber working the front desk said the shop cuts a lot of Amazonian hair and there hasn’t been much talk in the chair this week about the layoffs. But he did recall one mention of a person interested in a voluntary layoff.

A steady stream of foot traffic hit up the Airstream-trailer-turned Banana Stand, located on the fake grass area next to The Spheres. The woman working inside certainly wasn’t letting the layoffs get her down as she danced to the music she was playing inside.

As she handed out bananas to people and treats to dogs, the woman joyfully repeated a refrain of, “Hi baby! Thank you sweetie! Bye-honey!”

The New York Times reported this week that the cuts could affect as many as 10,000 people. If they go forward as expected, they would be the largest layoffs in the history of the tech giant. 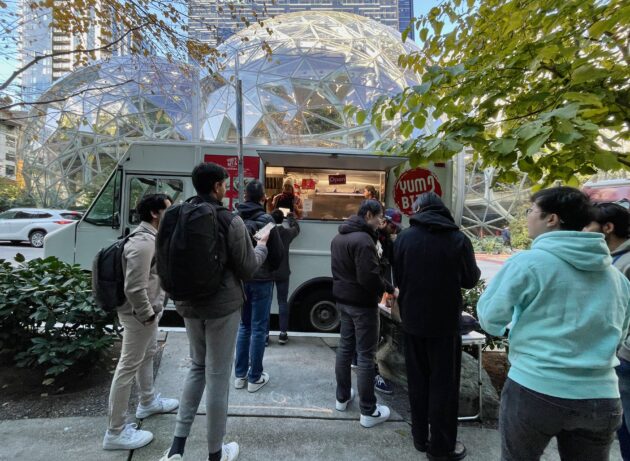 The company has grown tremendously over the past decade, including during the pandemic when demand accelerated for its services. Amazon employs 75,000 people in the Seattle region, many of them corporate and tech workers, as part of its workforce of 1.54 million people around the world, including warehouse workers who would not be impacted.

Across the street from The Spheres on Wednesday, two food trucks did a brisk lunchtime business as employees grabbed to-go boxes and headed back to the HQ towers. A man nearby who identified himself as a third-party vendor for Amazon said that when it came to the layoffs he had an opinion about who should be taking blame or losing their job.

“Whoever authorized all this [office] growth over the last few years,” he said.

Vendor Esmerelda Hernandez ‘really would like to connect with the community’ | Nov 16-22, 2022