At 8 am on Tuesdays in July, as usual, John Perkins was participating in his weekly Zoom Bible study. Officially the leader and the attraction for the more than 200 who log on each week, Perkins is far from the sole speaker, and that’s the way he wants it.

“I’m learning from them because they are doing really good research,” said Perkins, 92, of his co-leaders, both pastors and lay people, each of whom teaches from their perspective. “We want our Bible class to be a model of what the influential pastor or the influential leader can do back in their own hometown.”

This collective approach has been Perkins’ way of doing ministry since he began.

In November, shortly after having surgery for colon cancer, Perkins went where he has gone for years: the annual meeting of the Christian Community Development Association that he helped organize decades before.

It was worth the journey from Mississippi to Missouri, he said, to see his friends and to continue to motivate them while he could.

Give a gift of $30 or more to The Roy’s Report this month, and you will receive a copy of “The Lord Is My Courage” by KJ Ramsey to donate, click here.

“Really to pass on, in my own way, this mission that we have arrived at together,” he said in a phone interview. “I just came to encourage and to say goodbye.”

A farewell tour it may be, but Perkins has been in motion as long as he’s been in ministry, moving mostly between his native Mississippi to California and back, always focused on his goals of transforming communities through faith and racial reconciliation.

John Perkins poses ahead of the “Blessing of the Elders” awards ceremony at the Museum of the Bible, June 23, 2022, in Washington. (RNS photo by Adelle M. Banks)

Along the way Perkins has overcome the deaths of loved ones and his onetime hatred of white people, who included police who took the life of his brother and, years later, nearly killed him. Perkins, who at times was one of the few Black leaders in predominantly white evangelical settings, credits particular Caucasians for being there for him to introduce him to the Christian faith, bind his wounds and comfort him when he was mourning.

Born in 1930, Perkins lost his mother to starvation when he was just 7 months old. When he was 16, his brother was killed by a police chief after the young man grabbed the blackjack the officer had used to strike him.

Perkins fled to California in the 1940s after his brother’s death and a decade later launched a union of foundry workers in that state. After the Korean War broke out, he was drafted and served three years in Okinawa, Japan, and, back stateside, later became a Christian and was ordained a Baptist minister. 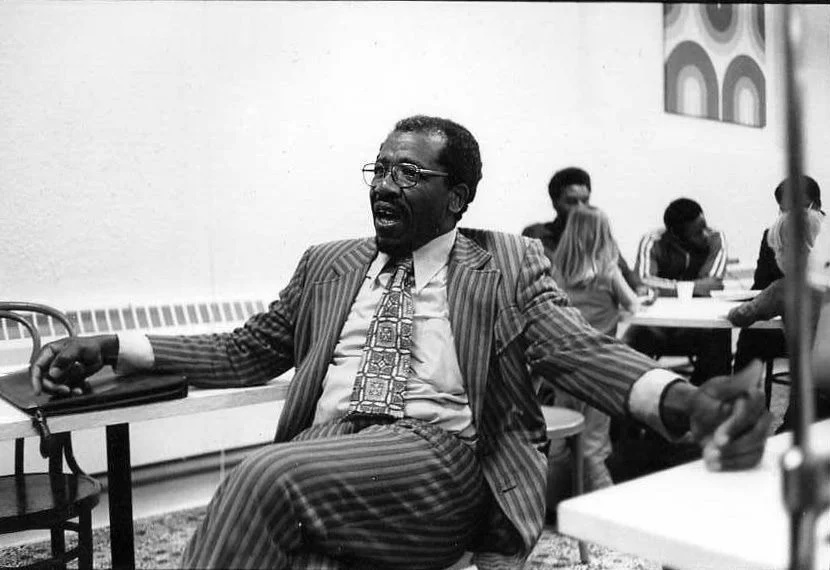 John Perkins in an undated image. (Photo courtesy of the John and Vera Mae Perkins Foundation)

Returning to his native state in 1960, Perkins turned out to be as much an organizer as a clergyman. He started a ministry in Mendenhall that provided day care, youth programs, cooperative farming and health care. He registered Black voters and boycotted white retailers. When he visited college students at a Brandon, Mississippi, jail who had been arrested after a protest in 1970, he was tortured — “beaten almost to death,” he writes in his latest book — by law enforcement officers.

After recovering he moved to Jackson, Mississippi’s capital, where he mentored college students.

In 1976, Perkins published his influential book “Let Justice Roll Down,” codifying his principles of relocation, redistribution and reconciliation — known as Perkins’ “Three Rs”— as a way to address systemic racism with social action.

“Justice is an economic issue,” Perkins told media. “It’s the management and stewardship of God’s resources on the Earth.” 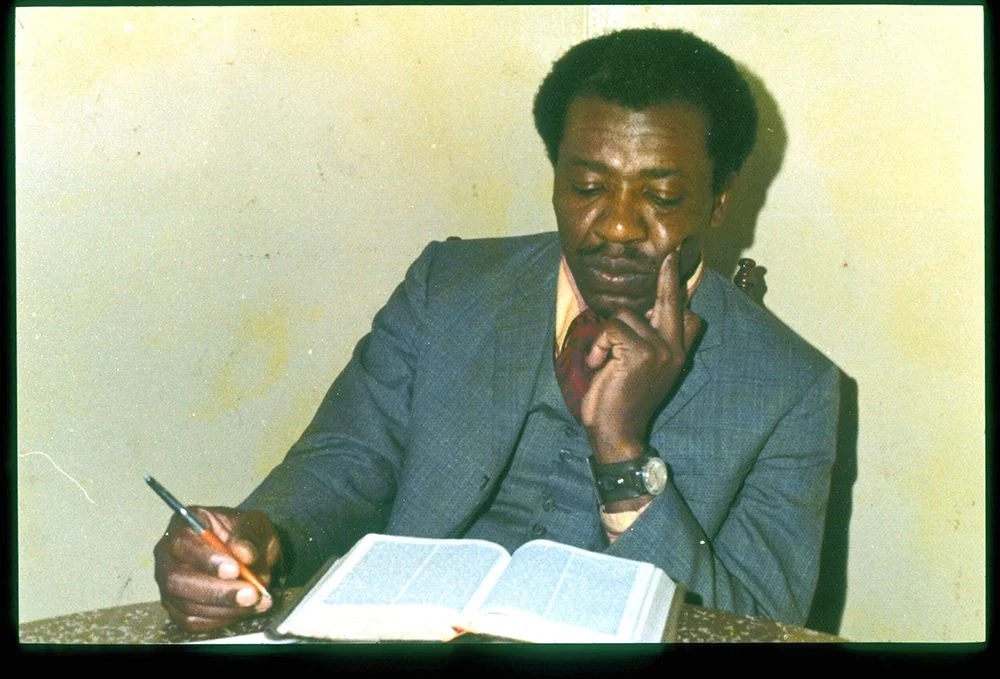 John Perkins reads the Bible in 1975. (Photo courtesy of the John and Vera Mae Perkins Foundation)

In 2006 Christianity Today placed “Let Justice Roll Down” at No. 14 on a list of the top 50 books that had shaped evangelicals over the previous five decades.

The ministry at Sider’s Mennonite church in Philadelphia, said Sider in an interview before his death on July 27, “is modeled on John Perkins, as are hundreds of others around the country.”

Perkins encouraged “collective prosperity,” where wealth is distributed equitably, and living in neighborhoods close to the poor, something he has done in the South and in the West.

“I’d say a lot of white suburban folks like me were deeply challenged by his call to justice and to the three Rs of his ministry,” said Jo Kadlecek, communication manager of Baptist World Aid Australia, who was inspired by “Let Justice Roll Down” and later co-authored a book with Perkins after he sought her out.

“’You know Jesus didn’t commute from heaven,’ he’d say frequently, referring to urban ministers’ belief that Christians who help poor and underserved communities should consider residing near them. 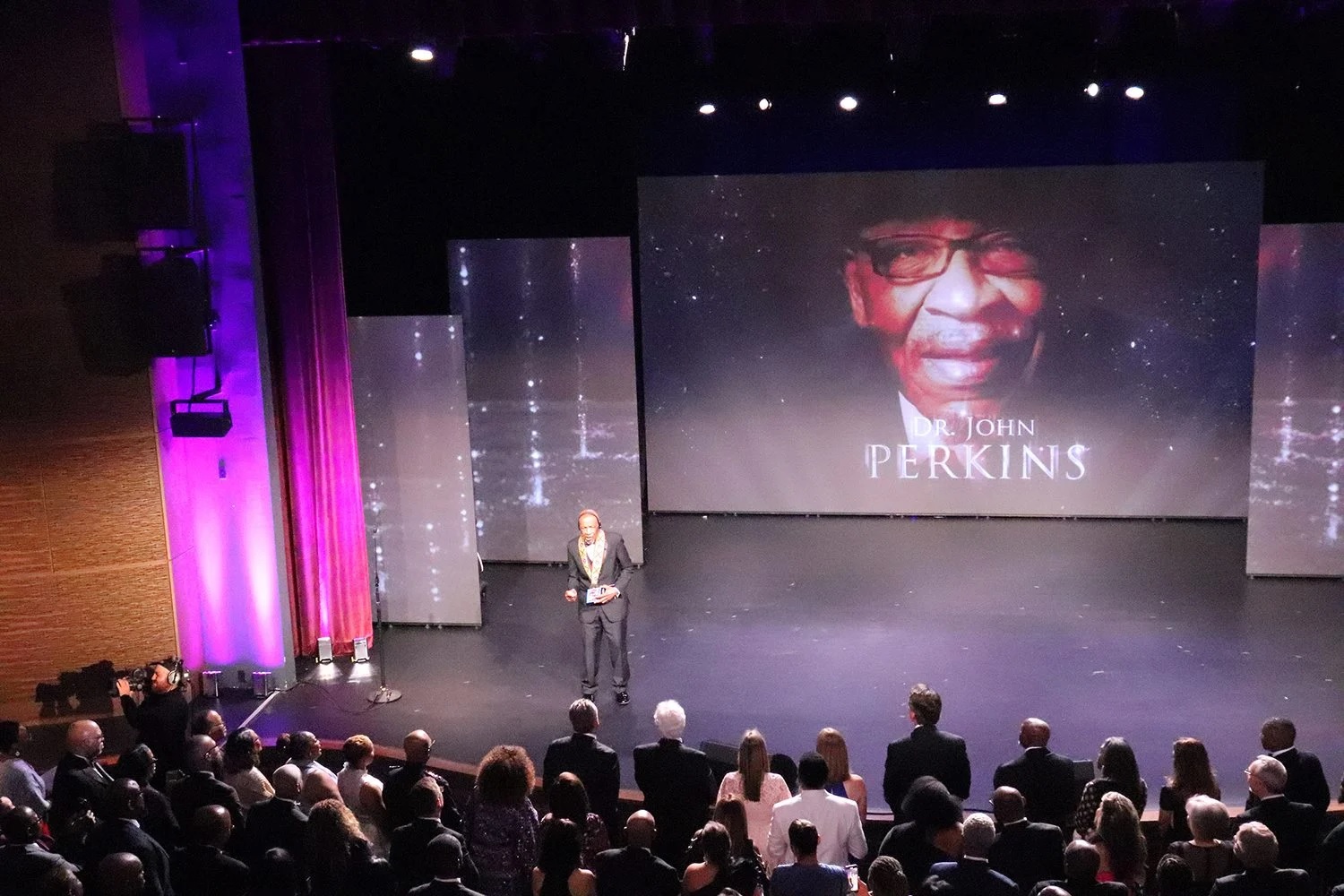 John Perkins speaks after being honored at the “Blessing of the Elders” ceremony at the Museum of the Bible, June 23, 2022, in Washington. (RNS photo by Adelle M. Banks)

Perkins returned to California in the 1980s — in part to hand off the leadership of what he’d built in Mississippi, to let others develop those skills — and Perkins’ family founded the Harambee Christian Family Center in a high-crime area of ​​Pasadena, offering after-school and teen programs and providing urban missions training to visiting church work groups.

“You win the trust of parents, you win the trust of community leaders, because you’re proving, day by day, that you want to develop children and young people,” said Rudy Carrasco, who served as the center’s executive director and is now a program director for the Murdock Charitable Trust in Vancouver, Washington. “I learned that from John Perkins. …And he’s doing it now.”

In 1989, Perkins cofounded the CCDA, taking his ideas from his own books and his own previous ministries to fashion an organization that urges thousands of annual conference attendees to focus on building churches and sharing the gospel in local communities while also renovating houses, hosting medical Clinics and tutoring schoolchildren to prepare them for college.

Sider said Perkins’ efforts on racial reconciliation contributed to the “evangelical center” growing more diverse to the point that the National Association of Evangelicals — on whose board Perkins served in the 1980s — now has an African American board chair, an Asian American president and a woman vice chair.

“That’s enormous progress, and it’s the sort of thing that John’s influence has helped to create,” Sider said.

In the 1990s, after returning to Jackson, Perkins founded the Spencer Perkins Center, named for his son who died suddenly in 1998 after suffering a heart attack at the age of 44. The center focused, as had other ministries of his father, on evangelism , affordable housing and helping poor children and families. 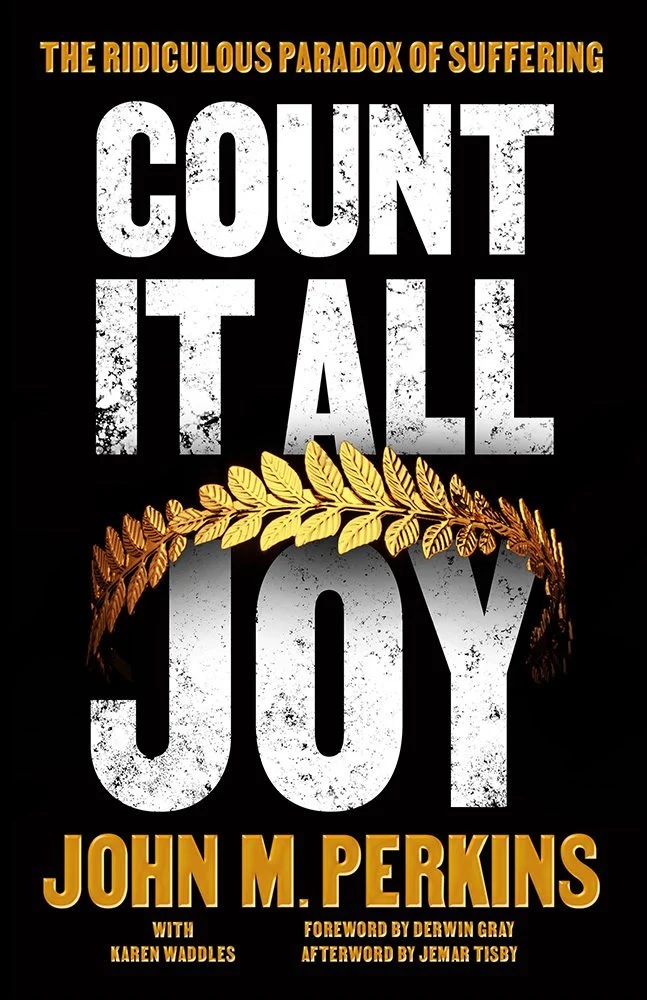 “Count It All Joy: The Ridiculous Paradox of Suffering” by John Perkins. (courtesy image)

The elder Perkins has summed up his life’s work and learnings in what he calls his “manifesto,” a trilogy of books that concluded with the publication in September of “Count It All Joy: The Ridiculous Paradox of Suffering.”

In the book, Perkins recounts some of the tragedies he has faced but talks of suffering as a part of faith, rather than a failure of it.

“This is the message that I want to leave as a witness to the next generation,” he writes in the introduction. “It’s not only given that we should believe on God, but that we should suffer for His namesake.”

Shane Claiborne, co-founder of Red Letter Christians and who has known and worked with Perkins for more than 20 years, said Perkins has long demonstrated “ministry of presence.”

Claiborne said Perkins’ approach to Bible study, whether early in the morning at CCDA conferences or online on YouTube and Facebook, is symbolic of the way he has lived his life.

“Almost everything that John does is collaborative,” said Claiborne, who co-wrote with him the 2009 book “Follow Me to Freedom: Leading and Following as an Ordinary Radical,” and has joined Perkins in an online Bible study, as has megachurch Pastor Rick Warren and civil rights lawyer Bryan Stevenson.

Participants “might not have all the same theological assumptions, but they’ve got some wisdom he wants them to share and they’re his friends,” Claiborne said. 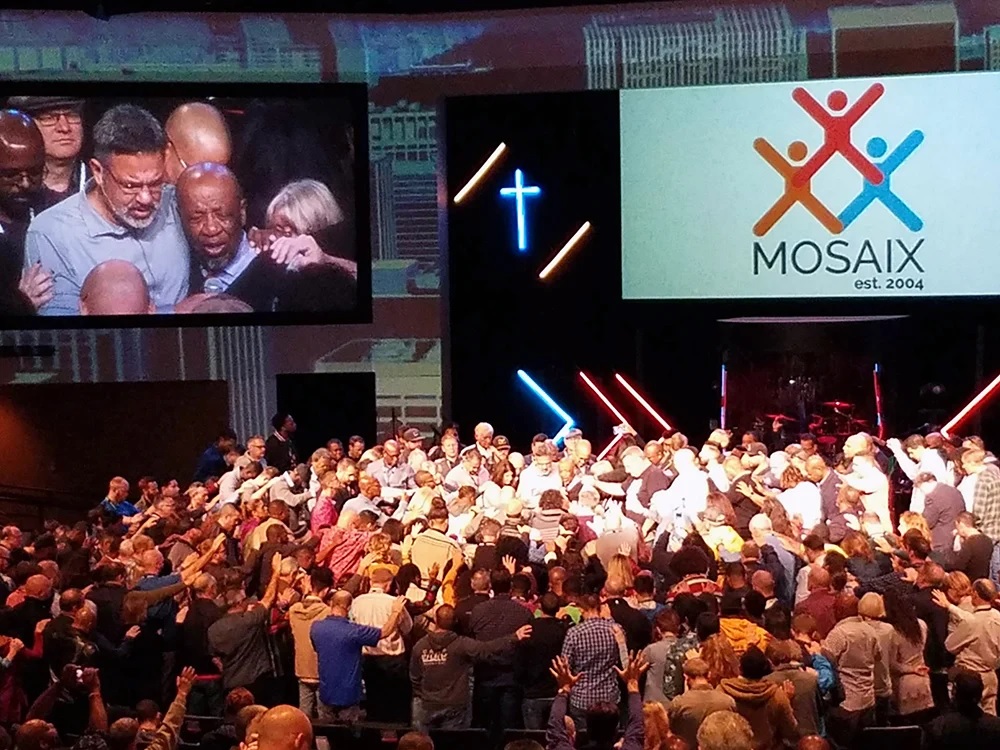 A large group prays around John Perkins during the Mosaix conference on Nov. 7, 2019, in Keller, Texas. (RNS photo by Adelle M. Banks)

Perkins has been trying to build co-laborers rather than view himself as the only one to emulate.

“My dad, he has a hard time with people thinking that he is this person that people should be following,” Priscilla Perkins, co-president of her parents’ foundation, said as the Nov. 1 online Bible study came to a close. “No, it’s Christ that we’re following, so we want to make sure that everybody knows that.”

Over the last two decades, institutions of higher learning such as evangelical Calvin University and historically Black Jackson State University have recognized her father with a program, or with a scholarship named in honor of Perkins and his wife, Vera Mae. 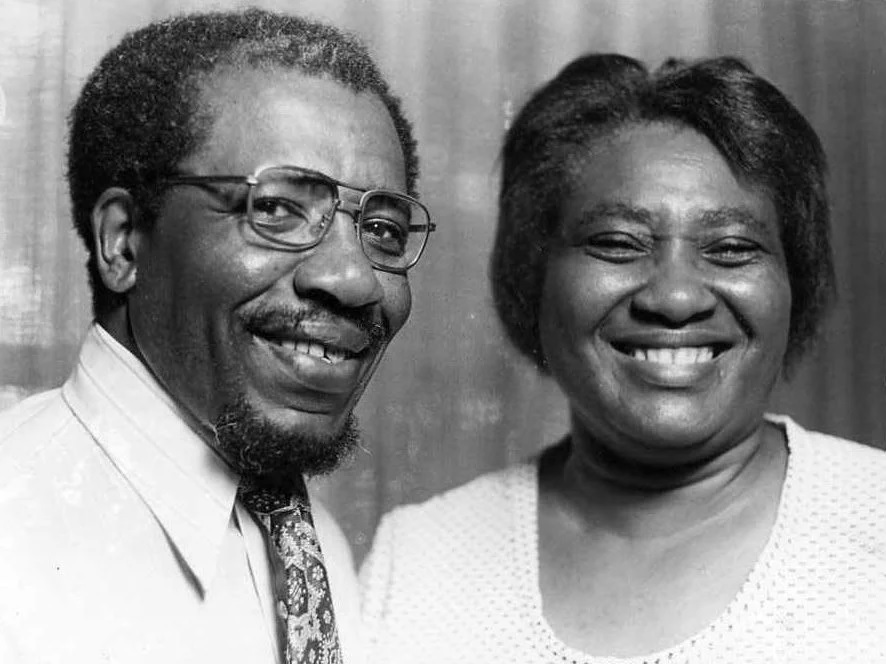 Seattle Pacific University has had a John Perkins Center since 2004 and has held training courses, lectures and a day of service for incoming students in hopes of moving them from charitable to community development activities.

John Perkins Center Executive Director Caenisha Warren said Perkins’ principles have become ingrained in her. She recalled seeing an article about adding a fourth R to the 3 R’s. She started reading it, “only to discover it was talking about the other 3 R’s of reading, writing and arithmetic, when I truly assumed it was the Perkins 3 R’s – relocation, redistribution, reconciliation,” she said in an email to RNS.

Perkins once said he didn’t want buildings in his name because they might not last. “I have to say it: It feels good,” he said of the programs named for him. 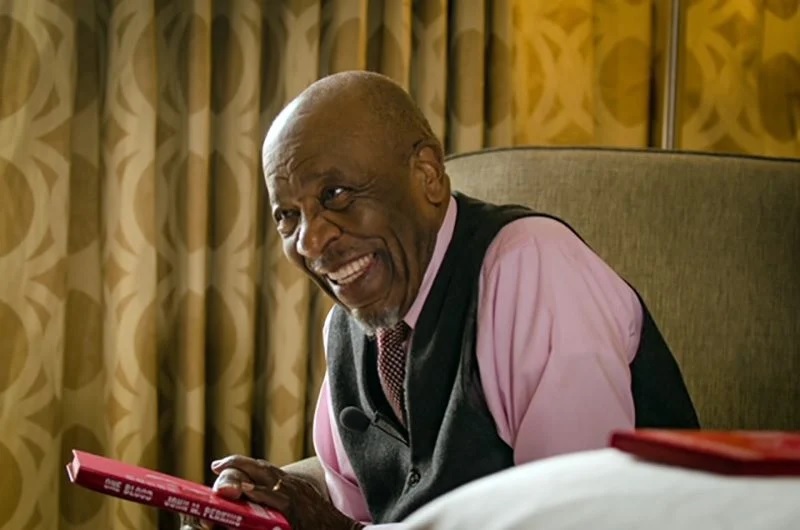 But his sense of satisfaction does not mean he feels the work he accomplished with his wife of seven decades has been sufficient.

“Deep down in my heart I find joy, but I also see that we could have done more,” said Perkins, who was honored in June as a Black Christian “elder” at a Museum of the Bible gala. “But I’m thankful as I look back at it.”

Adelle Banks is production editor and a national correspondent at Religion News Service.

Kentucky-Gonzaga matchup to be held at Spokane Arena | Sports