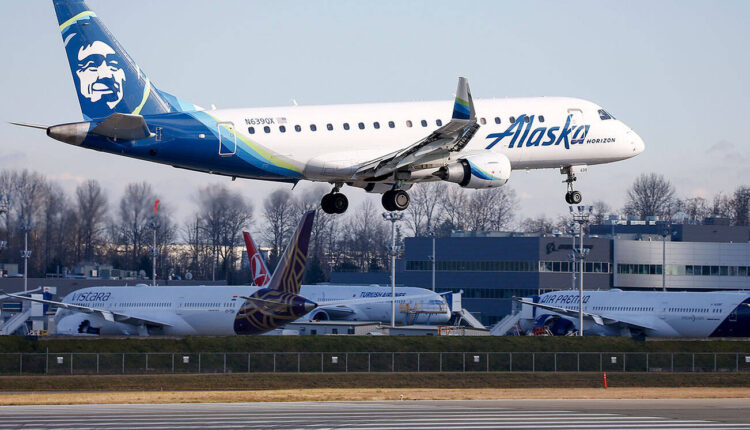 EVERETT – Alaska Airlines’ plan to increase its Paine Field flight schedule to more than a dozen daily round-trip flights is on hold until January.

In June, before the COVID-19 Delta variant soared, the Seattle-based airline planned for this fall to operate 13 daily flights and serve 10 destinations from the Everett Terminal.

However, the Delta variant caused travelers to postpone or cancel trips, which resulted in some airlines reducing their flight schedules.

“Peak days are our busiest times,” Lane said. “We sometimes reduce flights on other days when fewer guests are traveling in order to adapt capacity to demand.”

The delay in business travel, another victim of the COVID-19 pandemic, is a factor in Alaska suspending service from Everett to Los Angeles and San Francisco, Lane said.

Alaska expects to resume service in the Bay Area next spring or summer, Lane said.

Before the pandemic, business travelers made up about 70% of the terminal’s clientele, said Brett Smith, CEO of Propeller Airports, the private company that built and operated the two-gate terminal.

“Business travel is an important part of the revenue stream,” he said. Smith also noted that “the airlines, not just Alaska, are facing a shortage of pilots” and delaying the return of some flights and flight frequencies. The Biden Administration’s federal COVID-19 vaccine mandate for companies with 100 or more employees could also delay the return of some pilots to the cockpit. As an example, the Allied Pilots Association, the collective bargaining agency for 14,000 American Airlines pilots, reports that approximately 4,000 of those pilots have not yet been vaccinated. Alaska Air Group, which operates Alaska Airlines and Horizon Air, recently imposed vaccination requirements on its 22,000 employees.

Despite the challenges, Smith is optimistic. Propeller Airports, says Smith, “is well funded and will do it no matter how long it takes. We will be here. ”

In 2019, Global Infrastructure Partners, a New York-based mutual fund, made a significant stake in the Paine Field passenger terminal, according to Reiter Law, who represented Propeller on the transaction. Global’s investment was made on behalf of the Washington State Investment Board, which manages retirement funds for firefighters, teachers, police officers and other civil servants. Globally managed assets valued at approximately $ 75 billion.

Business travelers occupy less than a third of all airline seats, but generate an oversized portion of airline passenger revenue, an estimated 50% or more, according to the Airlines for America trading group.

Business travel is showing signs of recovery, but it could take a year or more to fully return, analysts say.

According to a U.S. Business Outlook Business and Industry Survey by the Association of International Certified Professional Accountants, two-thirds of U.S. companies say they have returned to pre-pandemic business travel levels or plan to do so within the next year.

Still, 20% of businesses said it could take more than a year to resume previous levels of travel, the report said. Another 10% said they never expect to return to pre-pandemic business travel levels.

The airline plans to add Tucson, a seasonal service, to its schedule on November 19th.

“We have made the return of recreational destinations from Paine Field a priority this winter,” Lane said.

Flights to Portland, one of Alaska’s major hubs, and San Diego, a major airline connection point, will resume in January, Lane said.

In January, three cities – Boise, Portland and Spokane – will depart from Paine twice a day.

In February 2020, United Airlines, which had six slots in the terminal, reduced its service and suspended three daily flights to San Francisco. The Chicago-based airline continues to serve its Denver hub.

As announced in July, United Airlines suspended passenger service at Paine Field this month and ended its only remaining flight, a daily departure from Denver.

Alaska Airlines currently has no plans to add a flight to Denver, Lane said.

Kenneth Bé was a passenger on United Airlines’ last departure from Everett, Flight 5498 to Denver, which left the gate at 9 a.m. on October 4th. Bé, a resident of Omaha, is a frequent visitor to Snohomish County.

“It was great to land at Paine Field and just minutes from where I was going,” said Bé, who is transferring in Denver. “‘I need to find another route to Everett with Alaska Airlines or Sea-Tac.”

In the first year of operation, the terminal served more than a million travelers.