A former realtor from Vancouver, Washington, spent a year and $15,000 building a 84-square-foot tiny mobile home from scratch. She now lives out of it with her dog — check it out

The exterior of the tiny wagon home.Stefanie Fisher/My Tiny Wagon

Some people baked cookies during the lockdown while others binged on their favorite television shows. And then there’s Stefanie Fisher, who built a tiny mobile home from scratch. 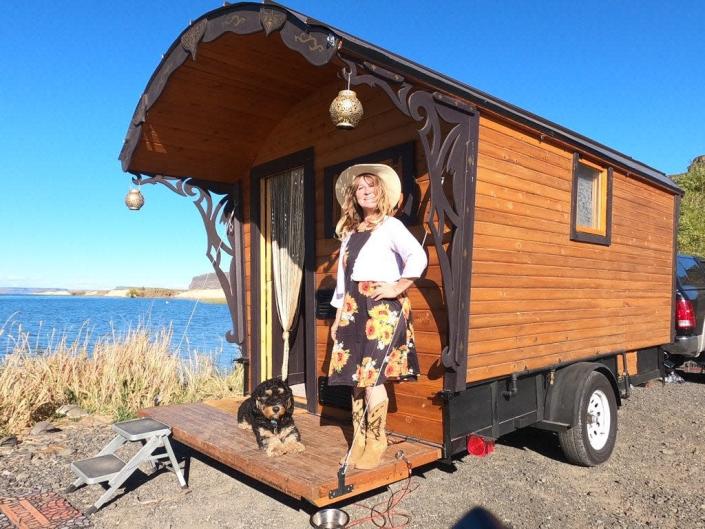 Fisher, who was born in Germany but has been living in the US for the past two decades, was a real estate agent in Vancouver, Washington, when the pandemic hit.

When her business slowed down dramatically, she decided to keep herself busy by taking on a new project — she wanted to build a tiny mobile home that she could travel around the country in.

“I am a people person. I need to be interacting with people, but with the social distancing, I couldn’t do that. That’s why I came up with building my dream travel home,” Fisher told Insider. “Building Misty, my tiny wagon, was a way for me to stay sane.”

Instead of converting an existing RV or bus, Fisher built her tiny home from the ground up. She started with a 7-by-12 flatbed trailer which she purchased secondhand. 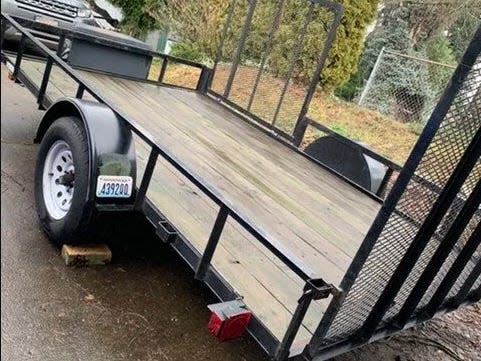 “I initially wanted to build a 200-square-foot tiny house, but I also wanted to travel again. With a tiny house of that size, it doesn’t tow very well, so I scaled it down to what you call a ‘ vardo,'” Fisher said.

“I didn’t want to do a school bus conversion or anything. I wanted something I could tow with a pickup truck, but also leave it in a place that I like and go pick up groceries or water without losing my spot,” she added.

Despite having some carpentry experience from remodeling her previous homes, Fisher was not a professional builder. 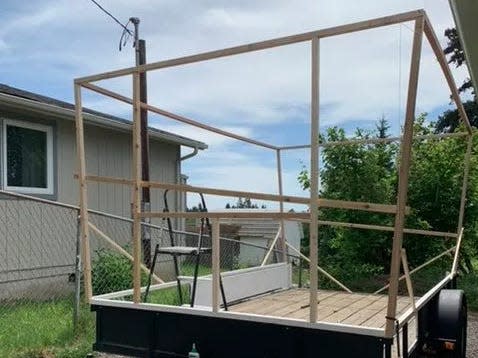 The wall frames are set up on the flatbed trailer.Stefanie Fisher/My Tiny Wagon

“I started doing research online so I could get a basic idea of ​​the whole building process and to figure out where I should begin,” Fisher said.

She didn’t have a proper design planned for her tiny home, but her priority was to create something as light as possible, she said.

“I just knew that I wanted it to be a little bit wider on the top than the bottom, so it’s angled out. I also wanted a rounded roof and a sleeping loft in there,” she added.

After putting in the framing, Fisher started installing her walls. To protect them from the elements, she waterproofed them with a wood sealer. 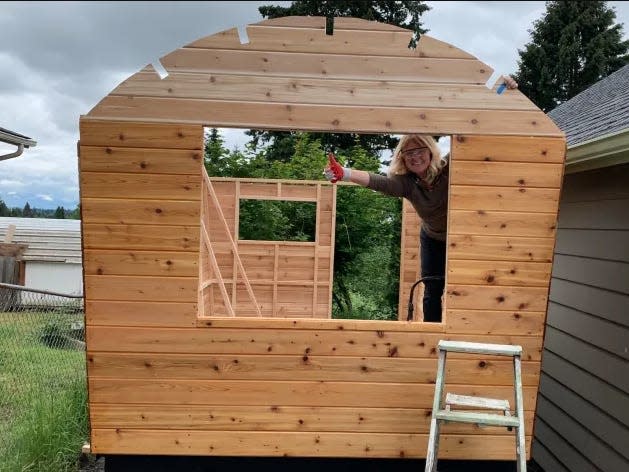 Fisher assembling the walls of her wagon.Stefanie Fisher/My Tiny Wagon

“I was lucky enough to buy the lumber right before COVID-19, or right around that time before it got so expensive,” Fisher said. “I got a lot of cedar and birch plywood, although I tried to use as little plywood as possible to keep it light.”

Special care had to be taken to choose the right materials for the climate, she said. Cedar, for example, handles the moisture of the Pacific Northwest well, making it a suitable building material for her project.

Fisher said that every piece of wood she used was carefully sawed, sanded down, and glued or screwed together by hand.

“I think I went through two gallons of glue, and I only used screws. I didn’t use any nails except for the windows,” she added.

Since she planned to travel and live in the tiny home while on the road, the walls had to be properly insulated. 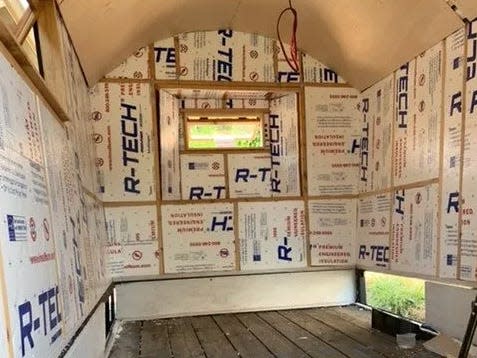 The wagon’s walls include a layer of insulation.Stefanie Fisher/My Tiny Wagon

Fisher built four small windows to ventilate the space — one on each side of the tiny home.

She also wanted the home to be completely off-grid, so she purchased a portable solar panel to power items such as her rechargeable LED lightbulbs.

“I ended up simplifying a lot of things because it was very hard to find professional help,” Fisher said. “I had two people bail out on me to install the solar panels and all that stuff, so I went with a portable solar panel instead.”

Before starting on the carpentry work, Fisher carefully marked her ideal floor plan and sectioned out space for her sleeping loft and kitchenette. 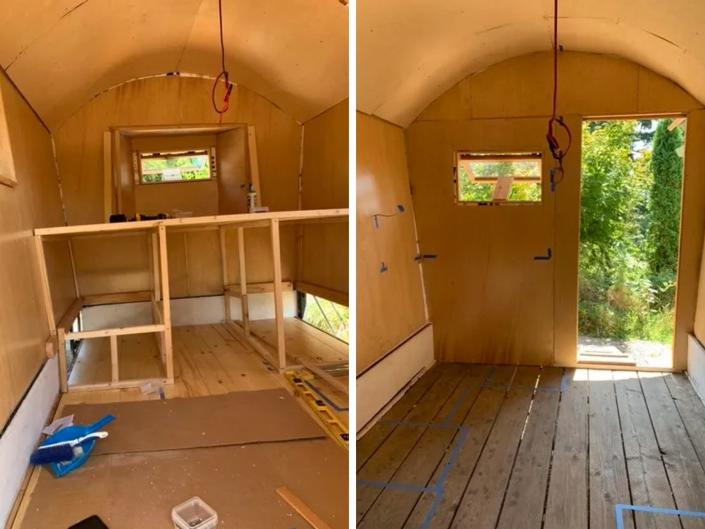 “I traveled the west coast in a little Dodge van when I was younger, and I know how limited space can be,” Fisher said.

She said when building cabinets for the tiny home, she focused on creating sufficient storage space for all her items — including a spice rack.

Fisher did not install a bathroom in the home. Instead, she chose to use a flushable camping toilet because she didn’t want the moisture in the house.

She also has an outdoor shower set up that she uses, consisting of a portable water heater that she can attach a shower head to, she said.

Fisher did almost all of the work herself, outsourcing only the metal roof, the propane gas pipes, and trailer brakes to a professional contractor. 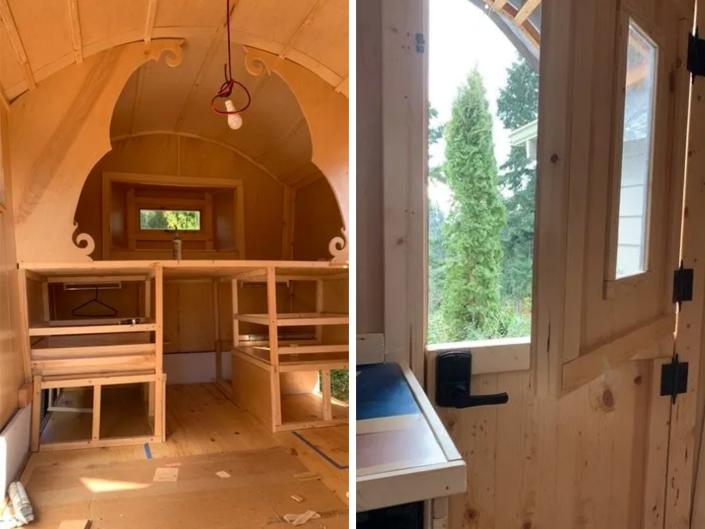 The carpentry work in the wagon is starting to take shape.Stefanie Fisher/My Tiny Wagon

Occasionally, her son or a friend would stop by to help as well, Fisher said.

The hardest part of the build was the epoxy pour that she tried to do on her kitchen countertop. It was her first time working with epoxy and she ended up having a terrible leak, she said.

“I tried to stop it with duct tape, crawling underneath where the sink area is, and I ended up having epoxy all over me, in the hair, everywhere,” she said.

Because of the leak, Fisher didn’t have enough of the original epoxy that she used, and she tried to mix it with a different product — which was a big mistake.

“The whole counter turned grey, so I had to chisel everything up again and sand it down with a planner,” she added. “It was horrible.”

Fisher kept the original wood finishing on the exterior and built a fold-out deck where she could relax and enjoy the outdoors. 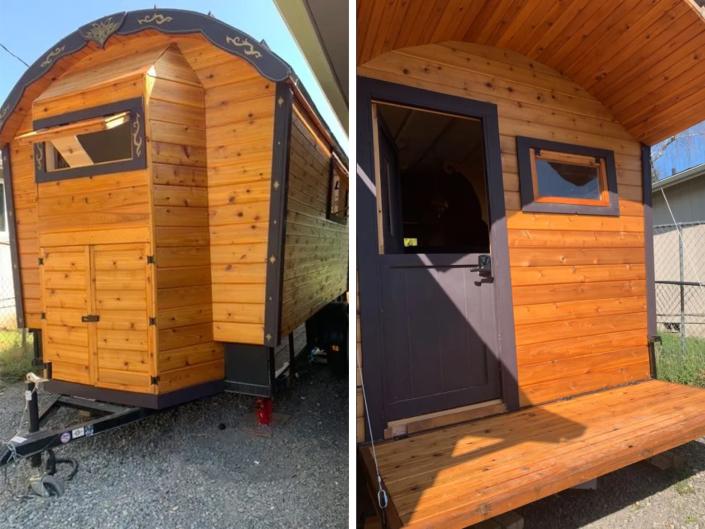 “I wanted something low-maintenance, and I didn’t want to paint the outside because paint always peels off,” Fisher said.

Despite that, her favorite part of the construction process was building the shell of the mobile home and watching it come together from almost nothing at all.

“I made a lot more progress more quickly on the outside compared to the interiors. It was also fun, but just building the structure itself, I think what the highlight,” she added.

Fisher started building her tiny mobile home in April 2020 and completed construction a year later, in May 2021. She estimates that she spent $15,000 in total. 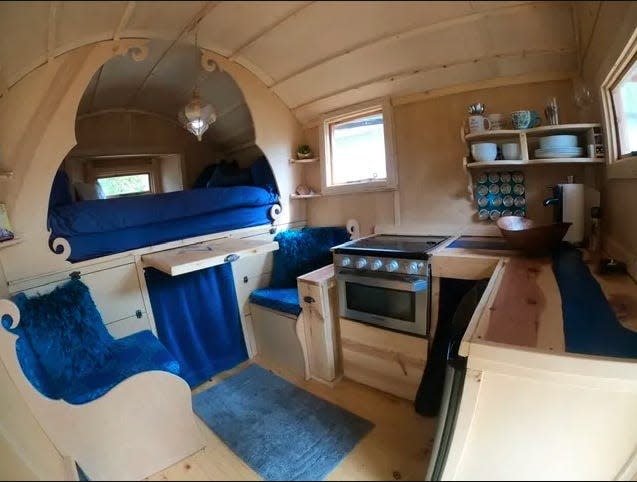 Due to carpel tunnel syndrome, Fisher was only able to work on the house for about three hours each day, she said.

“My goal was to go down to a tiny house festival in San Diego, and I actually finished it the day I left for that trip,” Fisher said. “It was my first trip, and it was like 1,500 miles — which is kind of crazy to do that on the first trip.”

Fisher also has a YouTube channel where she uploads videos about her travels, and it currently has over 2,200 subscribers.

Fisher was able to fit a fridge, a cooking range, a sink, and even a full-sized memory foam mattress inside the tiny home. 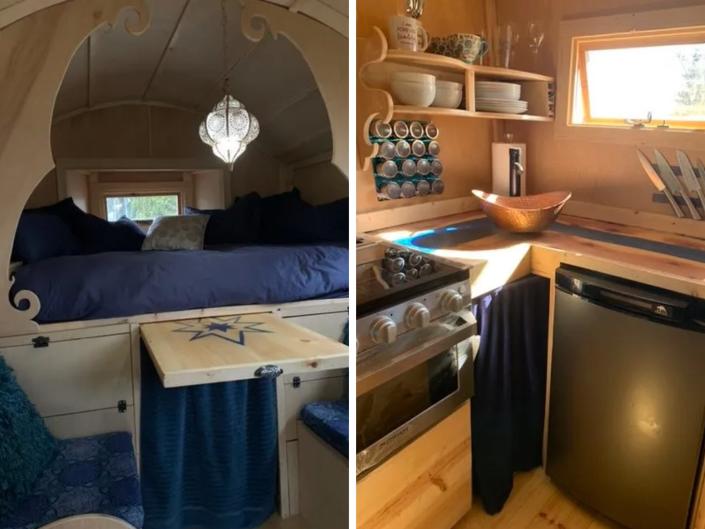 A collage showing close-ups of the sleeping and kitchen area.Stefanie Fisher/My Tiny Wagon

She added hidden cabinets into her built-in bench seats and created a pull-out countertop where she can have her meals. There’s also a crawl space under the sleeping loft where she keeps her clothes.

Underneath the sink is where she keeps her water containers, including 10 gallons of freshwater and one five-gallon container for household wastewater.

Reflecting on her experience building a tiny mobile home, Fisher has some advice for those who want to follow in her footsteps: Don’t be worried about making mistakes.

“If you build with wood, it’s very forgiving. I mean, anything can be corrected,” she added.

Fisher has been traveling and living out of her tiny mobile home for the past six months with her dog Ralphie. They’ve visited places around Washington and Oregon so far. 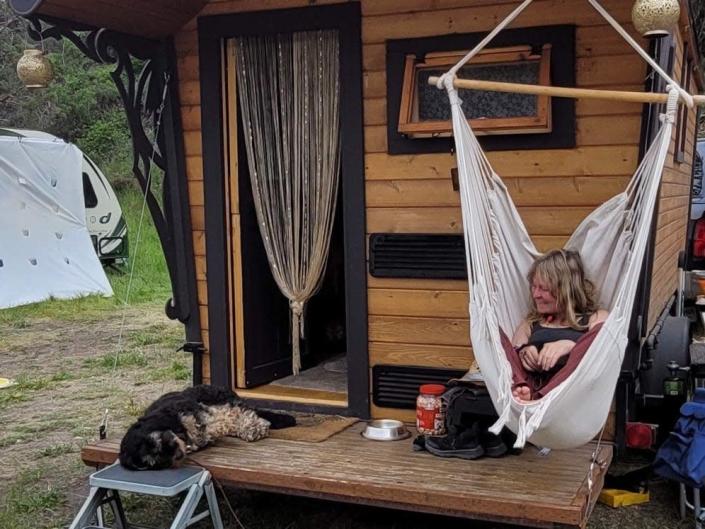 Fisher travels with her dog, Ralphie, in her tiny mobile home which she named Misty.Stefanie Fisher/My Tiny Wagon

“With gas prices right now, I’ve been staying more local rather than traveling around the whole country,” Fisher said.

Although she has a home in Vancouver that she shares with five housemates, Fisher says she hasn’t been back much this year.

“After the social distancing measures were lifted, I felt like being really social, so I attended a lot of events and volunteered a lot,” Fisher said. “I get together with other van people, and I get invited to stay somewhere with them. They’ll say, ‘Oh, we’re going to go camping. Do you want to come?’ And I just go with the flow.”