Small ships can visit incredible ports that large ships cannot access. From visiting historical forts and parks to massive dams and fish ladders to the largest waterfall in Oregon to America’s best wine region, and the roaring Deschutes River, here are four small ports you can visit on a Pacific Northwest UnCruise Adventure.

An UnCruise Adventure takes place on a small ship; the largest in the fleet carries 86 passengers.

I have detailed the experiences at four small ports that I enjoyed on our Rivers of Adventure and Wine vessel, Wilderness Legacy. A variety of activities are offered daily. I have briefly mentioned another activity choice that one could participate in.

These experiences were gained from my press trip on UnCruise Adventures and the Wilderness Legacy Ship. All thoughts and opinions are my own.

From Portland, Oregon, we headed up the Willamette River to the Columbia River, then followed the Mighty Columbia west to the historic port of Astoria, Oregon.

Like a soldier standing guard over the city, the Astoria Column rises 125 feet above the 600-foot summit of Coxcomb Hill. The Column, built in 1926, depicts the history of the Pacific Northwest (the discovery, exploration, and settlement). The beautiful murals on the outside tell many stories. One can also climb the interior of the Column.

Spend time enjoying the panoramic views at the summit. Look for the Astoria-Megler Bridge, the longest continuous truss bridge in North America. The bridge joins Astoria, Oregon, to Point Ellice, Washington. Also enjoy the views of the Columbia and Lewis & Clark Rivers, along with the coastal mountains. You might find a little treasure in the small gift shop at the summit.

Step into Fort Clatsop, located a mere five miles south of Astoria. Fort Clatsop is a replica of the complex in which Lewis and Clark and the Corps of Discovery camped over the winter of 1805. Picture yourself spending months in this small fort while rain and cold surround you! Brrr!

Take time to enjoy the Living History Programs where rangers give talks on the daily activities of the Corps. Spend time in the visitor center and museum. Do you have the national parks passport book? You can get it stamped here.

The other choice on my Rivers of Adventure and Wine was a 7-mile guided hike on the “Fort To Sea Trail.” 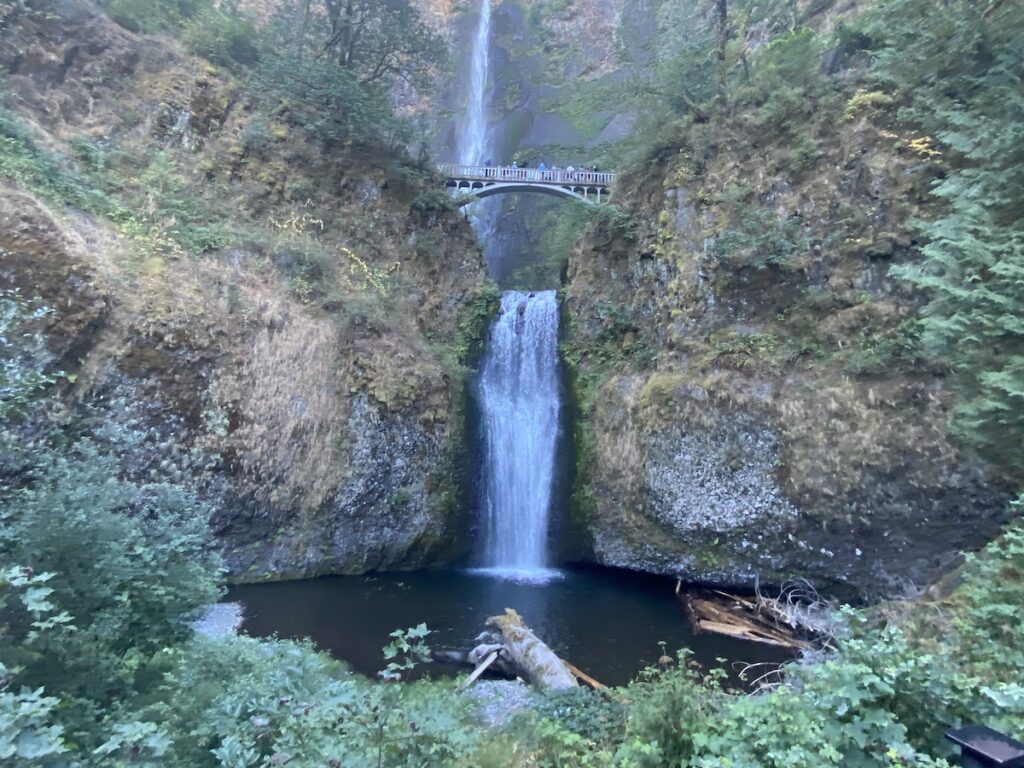 We anchored in the river at Stevenson Landing and took the skiff to the dock. We visited Bonneville Dam and Locks, approximately 40 miles east of Portland. We enjoyed a private tour of the dam and fish ladders. The Bonneville Dam is part of the system of 150 hydroelectric projects and several dams on the Columbia and Snake Rivers. Indeed, the Bonneville Dam is regarded as “one of the world’s largest hydroelectric systems” and is designated a National Historic Landmark.

Watch the migrating salmon and pacific lamprey swimming up the fish ladders outside, then head into the Viewing Rooms to watch closer. It’s amazing! Up to 250,000 fish pass through the ladders daily.

You can also get your national parks passport book stamped here.

Multnomah Falls is one of Oregon’s most recognized landmarks. The fall plummets over 540 feet to the second fall of 70 feet. Fed by underground springs, the fall has a year-round flow. Enjoy an easy quarter-mile hike to the Benson Bridge along the Multnomah Falls Trail. The hike becomes more strenuous from the bridge.

Multnomah Falls Historic Lodge’s Visitor Information Center is well worth a visit for trail maps and brochures of the falls and information on the Columbia River Gorge. The lodge also has a restaurant.

The other daily choice on my Rivers of Adventure and Wine Journey was a guided hike in the Columbia Gorge National Scenic Area.

The port for Walla Walla Washington is located in the small town of Burbank, Washington. Anchored at Burbank, we drove along the 15,000-acre McNary National Wildlife Refuge. This refuge is particularly important for migrating waterfowl. Many birds overwinter in this area — especially Mallards.

Enjoy a tasting of award-winning wines at Dunham Cellars in Walla Walla. The Walla Walla area has been named “America’s Best Wine Region” for the third year in a row by USA Today. Celebrating its 25th year, Dunham Cellars upholds this tradition. The tasting room offers both indoor and outdoor seating along with fine wines.

Enjoy strolling the lovely downtown Walla Walla for 30 more tasting rooms and delightful shops. Walla Walla Valley is also known for its Walla Walla sweet onions. Stop by the historic Marcus Whitman Hotel. The second floor has an interesting exhibit of paintings detailing the founders and the Whitman Massacre. 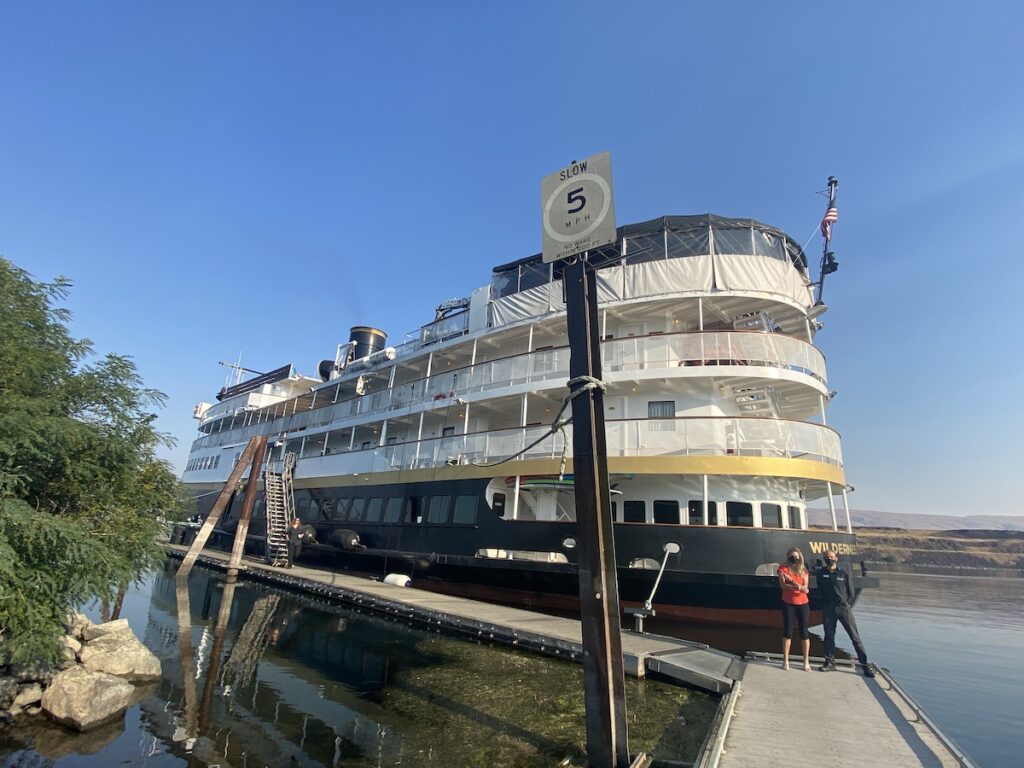 Docked at Port of the Dallas, Oregon

4. Port Of The Dalles, Oregon

We were delighted to be welcomed to The Dalles by the “The Gals From The Dalles, Floozies, and Friends.” The volunteer group promotes, educates, and entertains with a living history of the area. Here is a photo of their namesake, which they presented to the Wilderness Legacy.

The Maryhill Museum Of Art

From our port at the Dalles, a shuttle took us over the Dalles Bridge to the Washington side and approximately 20 miles to the Maryhill Museum of Art. Located high on the Columbia River Bank near Goldendale, Maryhill Museum is truly a hidden gem. It is a world-class museum housed in the original mansion of Samuel Hill. The extensive collection includes artifacts from Queen Marie of Romania, European and American paintings, Rodin sculptures, 18th-century Russian icons, and Native American basketry and artifacts. Enjoy time amongst the beautifully groomed 5,300-acre grounds by sitting on one of the numerous benches under the shade of a tree. 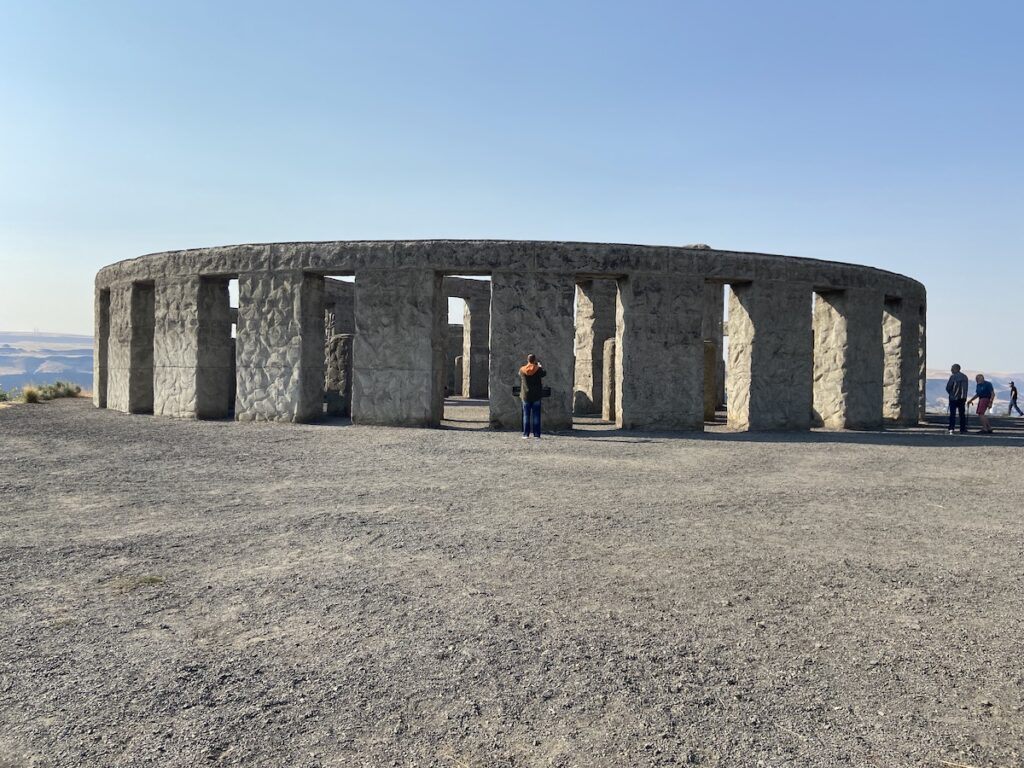 Stonehenge Memorial on the Columbia River

The Stonehenge Memorial, also built by Samuel Hill, is just east of the Maryhill Museum. The Memorial is a concrete reproduction of the English site and was constructed in 1918 to commemorate the Klickitat County soldiers who died in WWI. Stroll among the structure and discover plaques with the name of the heroes. Take time to reflect and enjoy the stunning views of the Columbia River.

Maryhill Winery Tasting Room & Bistro is located just west of Maryhill Museum, high on the banks of the Columbia River. Maryhill is one of Washington’s largest and most visited wineries. Enjoy tasting award-winning wines and fabulous views of the Columbia River and Mt. Hood. Wine Press Northwest honored Maryhill Winery as the 2015 PNW (Pacific Northwest) Winery of the Year. Team your wine with some great dishes at the bistro.

The other daily choice on my Rivers of Adventure and Wine Journey was a whitewater rafting adventure on the Deschutes River.

Only on a small ship can you reach these unique ports. If you are looking to travel away from crowds to areas less visited, an UnCruise Adventure is for you.