100 years ago in Spokane: Tycoon’s widow testifies to have burned down his house in alleged insurance fraud 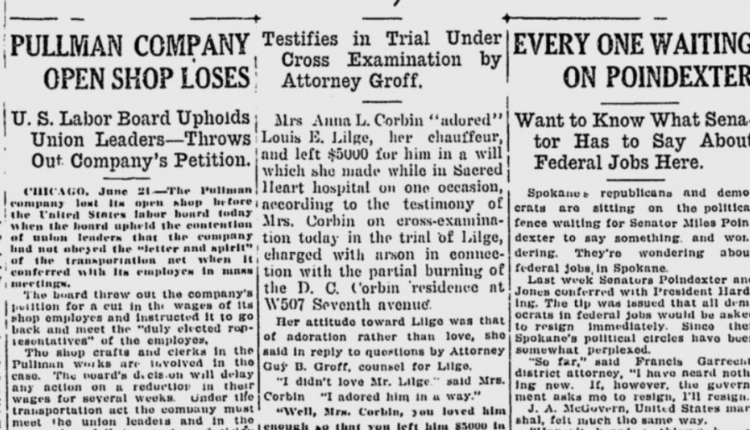 Anna Corbin, widow of Spokane tycoon DC Corbin, made a subtle difference when asked under oath about her feelings towards the caretaker of her house, Louis Lilge.

She previously admitted that they had lived together as a husband and wife.

She apparently adored him enough to leave him $ 5,000 in her will, though Lilge was furious when he found out because the amount was far less than she had put her nephew and others on. She told the court that she wanted Lilge $ 5,000 to complete the “rotary engine” he allegedly invented.

She had previously testified that she had reluctantly agreed to Lilge’s plan to burn her house down for insurance money because she was financially troubled and unable to maintain the house.

However, other testimony indicated that it was worth $ 200,000 at the time of her husband’s death just a few years earlier, even though that amount included the value of her home.

From the transport stroke: In response to the tram crisis, Spokane city officials designed a new system for rubber-tyred transportation.

“Since we are going to introduce a comprehensive system of buses, we should move away from the term ‘jitney’,” said the municipal utility commission. “… This word was coined to refer to the cheap planes of earlier years and not the large modern planes that are now in use and will carry 15 to 25 passengers.”

The switch to buses was sparked by an increase in tram tariffs, which upset the city’s commuters.